Mark is a past President of the Jewish Genealogical and Archival Society of Greater Philadelphia and currently serves as the Vice President of Programming. In his 24 years as a member of JGASGP, Mark has also served as editor of the Society’s quarterly journal Chronicles, Webmaster, and Vice President of Membership.

Mark is a first generation American whose parents immigrated America in the 1920s as teenagers. In 1996, while on business in Poland for a Fortune 500 Company, Mark visited his mother’s home town of Bialystok. His guide, also a genealogical researcher, piqued Mark’s interest in his family history, which he started from scratch as his parents and their siblings had previously passed away.

Mark’s interest in Japan and China comes from having spent 5 years living in Tokyo and Hong Kong in the late 1980s on assignment with his Company.

Now retired, Mark serves on the Board and Executive Committee of Jewish Records Indexing-Poland, is the founder of Bialystok Area Jewish Genealogy Group, and is on the Advisory Board of Gesher Galicia.

1) The Basics of Jewish Genealogical Research in Poland 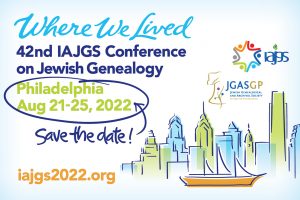 Fred Blum has assumed the position as the local co-chair of the IAJGS 2022 conference to be held here in Philadelphia from August 21 to 25.

We are now accepting payment for the 2022 dues.