The color of water 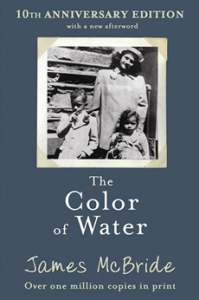 This fascinating, superbly written memoir was a New York Times bestseller for two years.  To date it has sold more than 2.1 million copies worldwide and been translated into more than 16 languages. It tells the story of James McBride and his white, Jewish mother Ruth. Ruth was born in Poland and raised in Suffolk, VA, the daughter of an itinerant rabbi and a loving, disabled mother who spoke no English. At 17, Ruth fled the South, landed in Harlem, married a black man in 1941, founded a church, was twice widowed, and raised 12 children in New York City. Despite hardship, poverty, and suffering, Ruth sent all 12 of her children to college.

James McBride is an award-winning author, musician, and screenwriter. His landmark memoir, The Color of Water, published in 1996, has sold millions of copies and spent more than two years on the New York Times bestseller list. Considered an American classic, it is read in schools and universities across the United States.

Felicia Mode Alexander will be leading our discussion.

Plunder: A Memoir of Family Property and Nazi Treasure

Menachem Kaiser is a writer living in Brooklyn, NY. His debut memoir, Plunder, won the 2022 Sami Rohr Prize for Jewish Literature and was named a New York Times’ Critics Best Book of the Year.

Menachem Kaiser’s brilliantly told story, woven from improbable events and profound revelations, is set in motion when the author takes up his Holocaust-survivor grandfather’s former battle to reclaim the family’s apartment building in Sosnowiec, Poland. Soon, he is on a circuitous path to encounters with the long-time residents of the building, and with a Polish lawyer known as “The Killer.” A surprise discovery—that his grandfather’s cousin not only survived the war but wrote a secret memoir while a slave laborer in a vast, secret Nazi tunnel complex—leads to Kaiser being adopted as a virtual celebrity by a band of Silesian treasure seekers who revere the memoir as the indispensable guidebook to Nazi plunder. Propelled by rich original research, Kaiser immerses readers in profound questions that reach far beyond his personal quest. What does it mean to seize your own legacy? Can reclaimed property repair rifts among the living? Plunder is both a deeply immersive adventure story and an irreverent, daring interrogation of inheritance—material, spiritual, familial, and emotional.

Extravagant, inventive, emotionally sweeping, Corelli’s Mandolin is the story of a timeless place that one day wakes up to find itself in the jaws of history. The place is the Greek island of Cephallonia, where gods once dabbled in the affairs of men, and the local saint periodically rises from his sarcophagus to cure the mad. Then the tide of World War II rolls onto the island’s shores in the form of the conquering Italian army.

Caught in the occupation are Pelagia, a willful, beautiful young woman, and the two suitors vying for her love: Mandras, a gentle fisherman turned ruthless guerilla, and the charming, mandolin-playing Captain Corelli, a reluctant officer of the Italian garrison on the island. Rich with loyalties and betrayals, and set against a landscape where the factual blends seamlessly with the fantastic, Corelli’s Mandolin is a passionate novel as rich in ideas as it is genuinely moving.

Let us know if you have other titles to recommend written by Jewish authors or are about Jewish content.

Reservations before November 22 are required